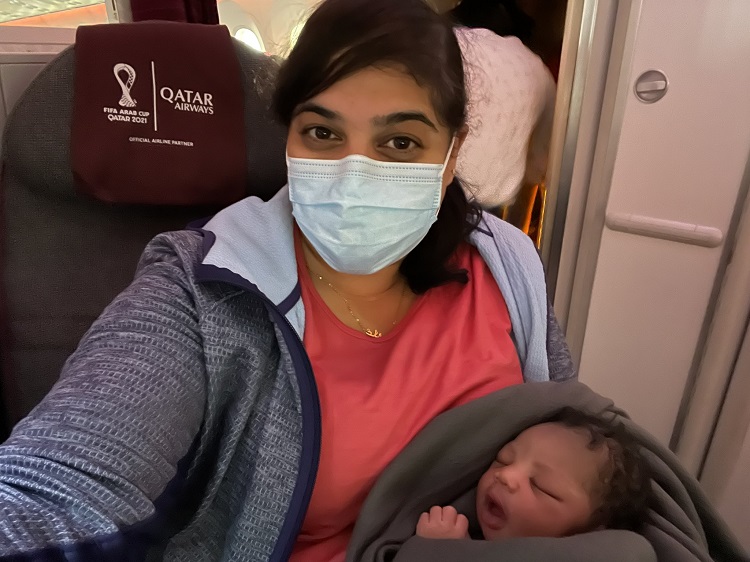 A Toronto travel medicine doctor redefined the title “travel medicine” when she delivered a baby on board a Qatar Airways last month.

Dr. Aisha Khatib, who is also an assistant professor with the Department of Family and Community Medicine at the University of Toronto, was on a overnight flight from Doha, Qatar, to Uganda for tropical medicine work when she heard the flight crew ask if there was a doctor on board. When she flagged down a crew member and told them she was a doctor, all she heard was “Go.”

Dr. Khatib said she wasn’t sure what the situation was initially until she arrived and immediately saw a woman lying on the floor of the airplane and a baby coming.

“We kind of just jumped into action,” said Dr. Khatib. “I’m kind of reaching over her to grab the baby to kind of slow it down from coming out. Someone had thrown me gloves in the meantime.”

Dr. Khatib added she wasn’t alone, as there was also a pediatrician and oncology nurse on board the flight.

“A lot of my research is COVID and air travel and safety on airplanes so I’ve worked with some of the directors from like Air Canada, Air Transat and Emirates. So I kinda have an idea of how to manage things, but this was different,” she said.

“Baby arrived crying well and we managed to get the delivery kit and we clamped the baby, we cut the umbilical cord and you know handed the baby to the pediatrician.”

The mother was a migrant worker from Uganda, travelling home from where she worked in Saudi Arabia. Dr. Khatib said she was a little worried because she didn’t know how much prenatal care the mother had received and it was her first child.

“There’s so many things that could go wrong in a delivery, baby can have complications, mom could have complications, but she seemed pretty stable and we checked everything. Then the pediatrician brought the baby back and I checked out baby, baby looked good,’ Dr. Khatib said.

“And then I said, ‘Congratulations, it’s a girl’ and and then the entire plane started clapping,” Dr. Khatib said, adding it truly felt like something out of a movie.

The mother ended up naming the baby Miracle Aisha, after Dr. Khatib.

They were able to keep an eye on the baby and mom for the rest of the flight, which was about five hours and set the mom up in a business class seat where she began breastfeeding soon after the birth.

Dr. Khatib praised the flight crew and added they had a doctor on the phone throughout the birth as well.

Rossen Dimitrov, chief officer of customer experience with Qatar Airways, said their crews are trained to deal with any onboard emergency, including delivering a baby.

“They’re professionally trained in aviation medicine and first aid,” Dimitrov said. “They go through rigorous training and we carry all equipment onboard the aircraft in case it happens. But obviously, it’s always better to have a hospital facility available and proper medical team out we’re trained to do that.”

Dimitrov told CityNews it’s very rare to see childbirth on board a flight, but they’ve had 11 babies born on their flights in the last 11 years.

“So as part of our protocol we have a satellite connection to a doctor through a MedLink, so we can always talk to a doctor to guide us. The [crew] have undergone the training. We carry the required equipment on board the aircraft as well. So we have actually a childbirth kit on the aircraft with everything that is required to deliver a child.”

He adds there has been one instance where a crew member delivered a baby on a short-haul flight.

“A lady went into labour very quickly and one of our crew members had no assistance from any medical team on board the aircraft and he delivered the baby himself.”

Dimitrov said they also make sure to check the credentials of any medical personnel who identify themselves as such on a flight before they allow treatment.

When asked if they are offering anything, like free flights to the mother and baby, Dimitrov said they definitely don’t want to encourage mothers to give birth on an airplane, but they would be organizing something special.

He said they usually have a cutoff date for when a pregnant woman can fly and this woman was just on the border of it.

The question most are wondering is what nationality does the baby take, considering they were born in international airspace?

“It depends on the circumstances where the aircraft is, what is going on the current time, what is recognized in the region that they’re flying over,” Dimitrov said. “But I can tell you that the baby has taken the nationality of his mother.”

They hope to eventually reunite Dr. Khatib with the mother, but for now, they are planning on a virtual reunion between the doctor and the 12 cabin crew members who assisted in delivering the baby.

Dimitrov added they are very proud of the crew.

“People don’t always see that, they just see that the serving elements, you know, the hospitality element, but they are trained so well. That’s why every airline is proud of their cabin crew community because they just perform so many amazing tasks every day”

Dr. Khatib said she has kept in touch with the mother over WhatsApp and even sent her a few photos of the baby. She said she gave the mother a special gift as well.

“I had an Aisha necklace that I was wearing in Arabic and so I gifted it to her as her namesake. So she’ll always remember I delivered up in the air.”