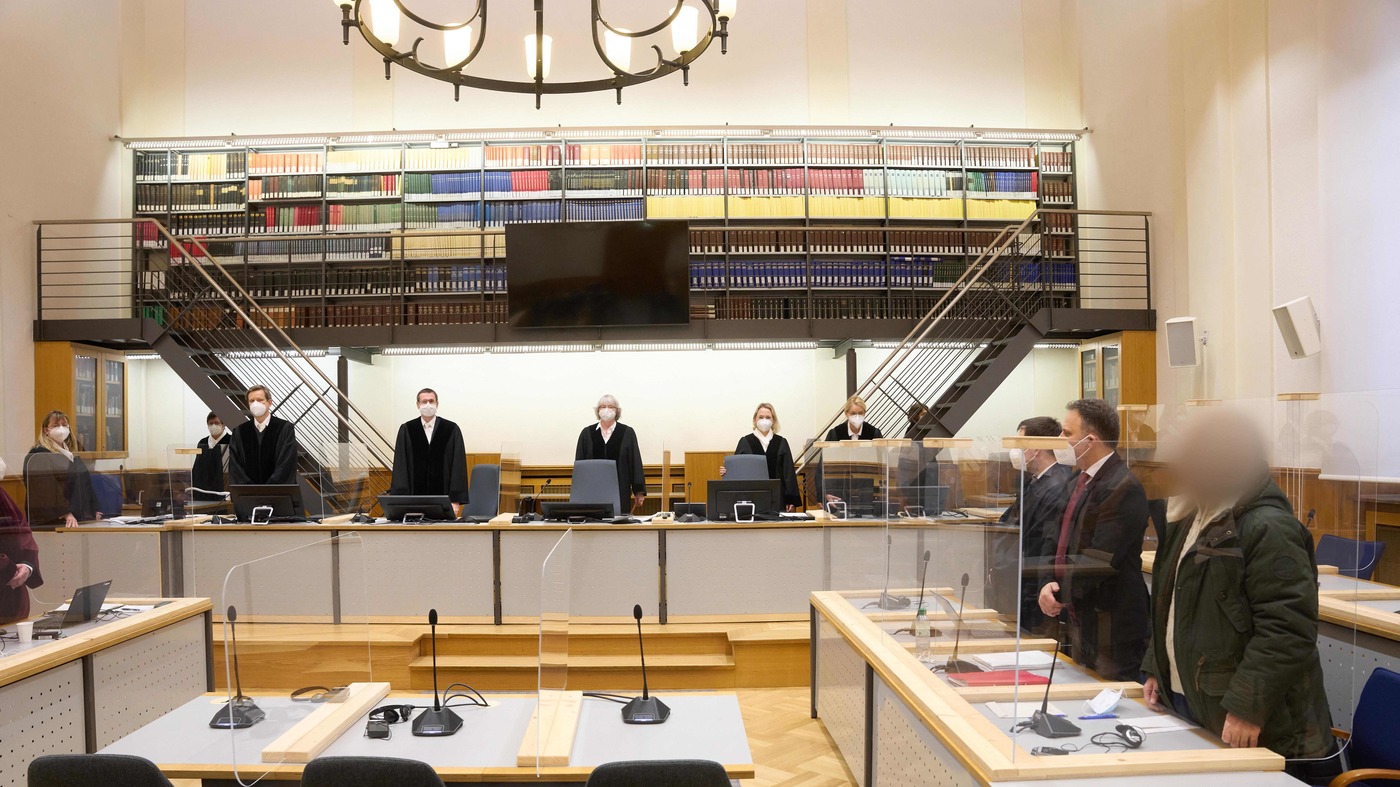 Defendant Anwar Raslan (right) and others involved in his trial stand in the Higher Regional Court in Koblenz, Germany, at the start of a trial session last month. Raslan was put on trial in April 2020 in a landmark case in Germany.

Defendant Anwar Raslan (right) and others involved in his trial stand in the Higher Regional Court in Koblenz, Germany, at the start of a trial session last month. Raslan was put on trial in April 2020 in a landmark case in Germany.

The ruling came in a German case against Anwar Raslan, who was accused of more than 30 counts of murder, 4,000 counts of torture and charges of sexual assault from when he oversaw a notorious prison in Damascus in 2011 and 2012.

The landmark trial marked the first time a high-ranking former Syrian official has faced Syrians in open court in a war crimes case.

Raslan, a 58-year-old former colonel was stoic as the five judges strode into a silent court room. The judges remained standing to deliver the verdict and sentence. They then read out the names of Syrian torture survivors who were in the courtroom.

Witnesses and the lawyers who worked on their behalf deemed it a rare success in prosecuting a war crimes case in which the crimes were committed under a government that remains in power — the regime of Syrian President Bashar Assad.

“This is the first step in a very long way to achieve justice,” says Wassim Mukdad, a Syrian torture survivor and co-plaintiff who now lives in Germany. “To experience the verdict against a former colonel in the intelligence forces, it’s history being written in front of our eyes.”

In more than 100 court sessions from April 2020 to this month, five federal judges heard over 100 witnesses, including 50 torture survivors, to examine state-sponsored torture in Assad’s Syria. German authorities arrested Raslan in February 2019, four years after after he defected from the Syrian government and fled to Germany.

The court room was packed with Syrian lawyers and activists who had worked for this moment for years. The harrowing testimony was noted by the judges. The brutality of Syria’s Assad regime was also on trial.

German prosecutors launched the criminal case under the principle of universal jurisdiction, which means a country can prosecute alleged crimes against humanity committed elsewhere.

The trial is a blueprint for future war crimes prosecutions

Mukdad testified in August 2020, a few months after the trial began. He also gave a statement in the trial’s closing days on atrocities committed in Syria.

The verdict sends a message of accountability to the Syrian regime, he says, after more than 100,000 people were disappeared and thousands were systematically tortured, accelerating in 2011 after a civil uprising against the regime touched off Syria’s war.

“We feel that we achieved something. Our pain and our suffering is not in vain,” Mukdad says.

Nuran al-Ghamain, one of the few female torture survivors to testify, said she collapsed in court after seeing Raslan for the first time since 2012, when she was released from prison in Damascus.

“It was hard for me to take,” she recounts about her day in court, but her testimony was a relief, she said. In a closing statement this month, she hailed the German judges for adding sexual violence as a crime against humanity.

The trial is a blueprint for future prosecutions, says Patrick Kroker, a senior legal advisor with the Berlin-based European Center for Constitutional and Human Rights. Kroker represented some of the Syrian torture survivors.

Syrian witnesses’ testimony was key to the case, he says, and the bravery they showed was “very, very inspiring and a very powerful moment.” The torture survivors delivered their remarks to the German judges, but aimed them mostly at the defendant, who appeared visibly discomfited, according to those in the courtroom.

Raslan said that torture took place in Syria, but denied personally taking part in it. The Assad regime has consistently denied there is torture in Syrian prisons, despite evidence to the contrary.

Some Syrian exiles have criticized the trial

Despite Thursday’s verdict, not everyone in Germany’s 800,000-strong Syrian community was happy with the trial. Raslan was too low-level, some complained — and serving officials of the Assad regime remain free. The trial, held far from where most of the Syrian community lives in Berlin, was largely inaccessible to the community. The court provided no transcript of proceedings.

Judges rejected a petition to allow audio recordings of the trial and had to be forced by another court — following a lawsuit by Arabic-speaking journalists and human rights organizations — to provide Arabic translations of the German proceedings. There was no witness protection, even as the Assad regime was threatening the families of witnesses back home.

In a closing statement, attorney Anna Oehmichen, who represented four Syrian plaintiffs, praised the judges for their objectivity. But she also criticized the court for a “failure to inform those actually affected,” referring to the Syrian exile community in Germany as well as those who remain in Syria.

Oehmichen warned that ”an information vacuum creates ideal conditions for misunderstandings” that could undermine the Syrian exile community’s trust in the German legal system. “It plays right into the hands of those who should actually be brought to justice,” she said, referring to Syrian regime officials who can twist their own version of the trial’s outcome.

The German decision to hold the trial came at a time when international tribunals have been politically blocked in the United Nations by China and Russia, allies of the Damascus regime. Germany was the first to bring charges in a national court. There are now cases pending against Syrian officials and loyalists across Europe.

Ideally, this case should have been tried in Syria, says ECCHR general secretary Wolfgang Kaleck, but that was impossible.

“Those who criticized the Koblenz trial, fair enough,” says Kaleck. “The decision [to hold a trial in Germany] was nothing or this. And, you know, it was a promising start with more to come.”